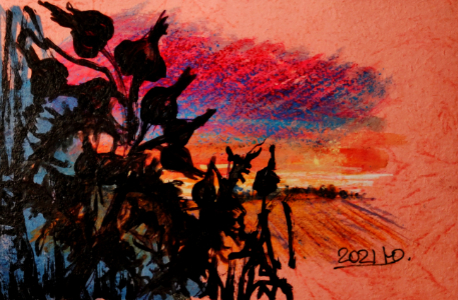 You can see on this collective a new series of the landscapes and illustrations about Russian woods near Moscow made with mixed media drawing on the cardboard 15×10 cm. The Moscow fall sketchbook 2021 completes the series. The sketchbook is open invitin a visitor to scroll the immages made with ink on acrylic paint.

If you want to receive the original handmade art postcards from my tours just click here and be a part of the exclusive supporter’s club! 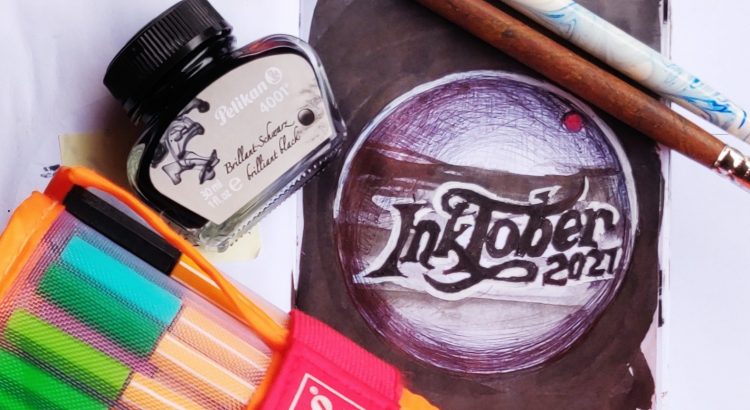 This year all the illustrations are made in surrealism style and are inked with black and coloured pens. Every drawing of this sketchbook contains a sphere of glass. 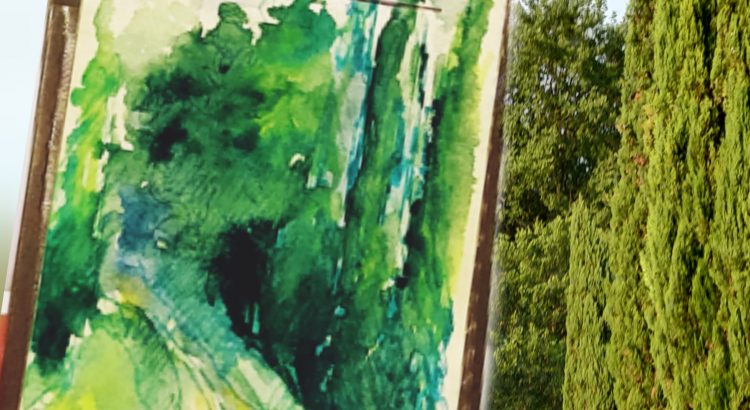 It’s not my first time in Tuscany (Italy), that is why I decided to dedicate Tuscany sketchbook 2021 to the places and atmospheres of this region seen and sketched from the different point of view.

This summer we have chosen together the places to sketch…

We saw Florence, Piazza del Duomo and Ponte vecchio from the different point of view in the Cascine park near Arno river.

We also walked among the people of Florence visiting Cascina Market, on of the longest of the Europe.

They come from Vinci, like Leonardo. These mini handmade sketchbooks 3×3 cm purchased in Leonardo’s native town are waiting for the new trips to tell. Click here and suggest the destination!

Tuscany sketchbook 2021 is only piece only. Click here and write me to have it.

If you want to receive the original handmade art postcards from my tours just click here and be a part of the exclusive supporter’s club!

The original “polar Experience” collection evolves and becomes “Polar X”. It was born in grey rainy winter days and foggy evenings of Turin (Italy) to bring warmth, softness and colours.

Each outfit appears inside a surreal landscape painted with airbrush soft colours shadows and lines.
Into the blue. Wide cardigan, knee skirt with asymmetrical zip and small bag in light blue polar fleece.

Eternal beige. Soft and extreme beige for winter days with and without belt. Mid length dress and small bag.

Details matter. Small bags in light blue and light beige fleece are ideal to complete every day or special outfits.

To commission your favourite outfits click here and contact me or fill in the form below. Please remember to indicate the style code/s and your measurements: hight, chest, hips, waist and lenght of the item and the colour (if different fron the colour on the picture). I will be happy also to design create your own item specially for you.

If you have questions, commets or thoughts to share click here and write me. I will be happy to reply. 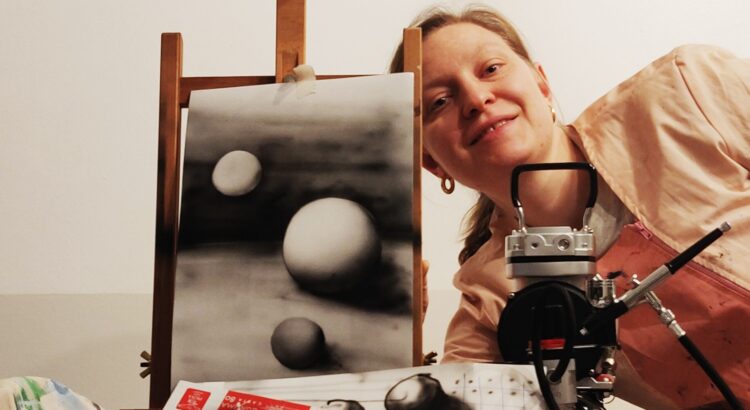 31st January 2021 the artists of all over the world explore the creativity during “the 100 day project 2021″.
Are you ready to follow me?

My project is to learn airbrushing. Let me explain you the why.
Blade runner 1982. Do you remember Pris and her make-up? The moment I saw the girl airbrushing the black eye shadows I understood how I want to feel making my art. That moment my passion for airbrushing was born.

Let’s start from the begining.

What is airbrush and why it is called this way? Aitrbrush is a small, air-operated tool that sprays various media, most often paint but also ink and dye, and foundation by a process of nebulization. Airbrushing is a way of painting using the airbrush.
Now it’s time to meet my airbrush and discover the basics.

My airbrush came for Christmas 2020.

It is a double action control gravity feed airbrush.

These are the basic airbrushing moviments: dots, lines and curves.

These are the basic forms to learn how to airbrush the shadows and volums. The first and the most important is the sphere.

Now let’s spend a few words about cleaning. Airbrush neads to be cleaned very often: to change the colour, to add the colour and before you put it away.

The most long cleaning is one after you finished to use the airbrush. It needs you to diassemble and re-assemble it. Every detail is important. Is even a smallest part of the airbrush is out of place it will not work. 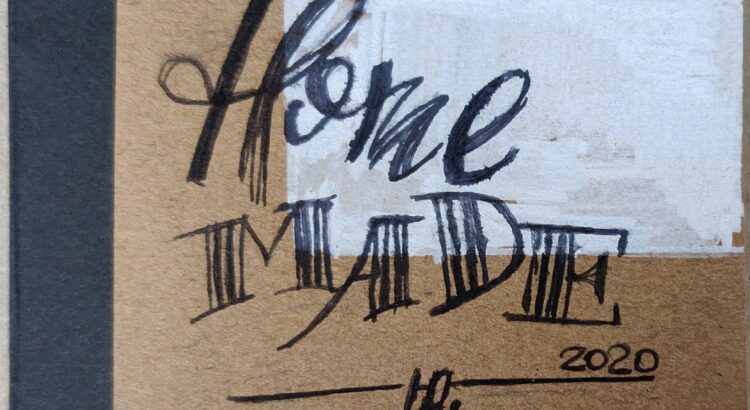 Read this article in Italian

Is it possible to travel even when you stay home to stay safe? Is it possible during the lockdown to go through the home space to go forward? I say “yes” and accept the challenge!
My lockdown started 10th march 2020. I kept on sketching all that time. This is the chronicle of my interior journey to the far and close places I have never seen but I would like to.

Don’t miss the limited edition capsule collection of apparel and accessories from t-shirts to phone cases all with the artworks of “Home Made” sketchbook.

Let me introduce my cats. Their names are Susan and Brie and as well as us they shall stay at home for the lockdown. They pass almost all day on the carpet. Looking at them I see the Egyptian sphinxes. There must be a reason why people revere the cats since the ancient times.

It’s Flash-mob time! There are 2 or 3 flash-mobs every day: first we sing to be brave, than we applaud to the doctors, than we dance, than we place music instruments and make noise … It seams to be on carnival of Rio de Janeiro but we are on the balcony of our homes. It is lockdown, there is COVID-19 outside.

Cactus are the unique plants to survive on the balcony that watch south. This little cactus in the spring sun seams to remember its motherland: the desert. It would be great to go their to sketch that surreal lunar landscapes live.

A puddle on the terrace of my home generously left by the huge Turin rain reflects some weeds. It seams to me to see the fishermen houses of Marano Lagunare near Venice reflected in the water.

The face masks are scarce, so I made them for my family. Finishing the last one the memories of my travel to Turkey with my mother back to my mind. I remember the images of belly dancers with the transparent veils on their faces.

On the balcony in a sunny spring day I talk to my neighbour, during the lockdown a balcony became a sort of social club where to meet people and talk awhile. It sems to be in a typical town of south Italy. I have never been to Naples, but I would like to go there one day.

Colors of the wine is the project made of 10 pages of watercolors with red wines of Italy and the stories of the regions the come from. The project will be a part of a special selection at “Matite in viaggio 2020” collective in Venice called “Wine civilization in Italy, in Europe, in the world”.

The project
Every wine has its own character, destiny, perfume and colour; the taste comes after.
Some wines like Freisa, Nebbiolo, Sangiovese take their names from the wine grapes; other wines like Chianti, Brunello di Montalcino, Barolo has taken their names from the places whey come from.
The landscapes, people, culture and traditions – everything is connected in the amazing harmony.
This magic connection between places and wines gave origins to the idea to paint the wine places of Italy with only one colour: the colour of wine.

Piedmont is the region of Italy that gives origins to the great wine grapes. Here Nebbiolo, Barbera, Freisa are grown. Let’s discover their colours and their mother lands with Langa hills running far far away.

Barbera grapes is believed to have originated in the hills of Monferrato in central Piemonte, Italy, where it has been known from the thirteenth century.
Barbera del Monferrato takes its name and origins from these antique wine grape.

Bonarda Piemontese, now officially listed simply as Bonarda but also known as Bonarda di Chieri and Bonarda del Monferrato is a red wine grape variety that is grown in the north-western region of Piedmont. Today is found in scattered plantings along the left bank of the Tanaro river near Govone.
Bonarda Piemonte is the wine that took its name from this kind of grape.

Freisa is a red Italian wine grape variety grown in the Piedmont region of north-west Italy, primarily in Monferrato and in the Langhe, but also further north in the provinces of Turin and Biella. Freisa is a vigorous and productive vine whose round, blue-black grapes are harvested in early October.
Freisa d’Asti takes its name from the grape and the land where it grows.

Tuscany with its reach landscapes from green and blue Maremma to the desert fields near Florence and hills of Chianti region is the land of Sangiovesse wine grape that gives origins to numerous wins from Brunello di Montalcino to Chianti.

Brunello di Montalcino is a red DOCG Italian wine produced in the vineyards surrounding the town of Montalcino, in the province of Siena, located about 80 km south of Florence in the Tuscany wine region. Brunello, a diminutive of Bruno (“brown”), is the name that was given locally to what was believed to be an individual grape variety grown in Montalcino. In Montalcino the name Brunello evolved into the designation of the wine produced with 100% Sangiovese grape.

If you have questions, comments or ideas to share click here and write me. I will be hppy to reply. 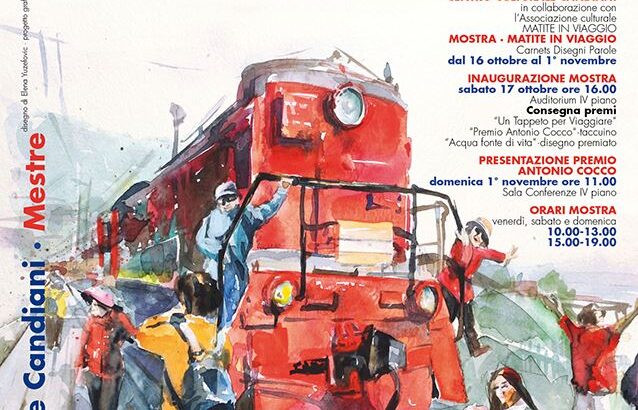 Read this article in Italian (Italiano)